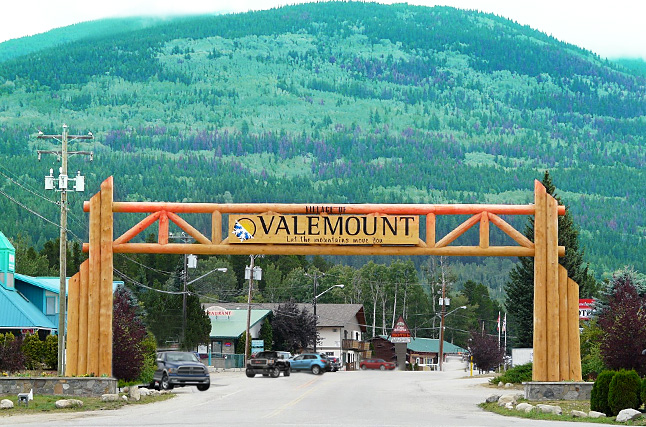 I didn’t know before getting to Valemount that I’d be living with the mayor. In fact, I might be living with the premiere power couple of the village, since his partner, my boss, is the editor/publisher of a local newspaper. I live in their basement.

But the term ‘power couple’ seems out of place in this mountainous village of some 1000 inhabitants (“on a good day,” one local said to me), and especially in reference to my two new roommates. Since getting here last Sunday, I’ve discerned a down-to-earth, genuine passion they both have for the well-being of this village. They’re highly motivated people who, thankfully, dispelled any premonitory fears I had of this place being an ultra-conservative, out-of-touch backwoods community embodying more of the clichéd Albertan smug prudishness (heartland of the Conservatives, oil money and home to more pickup trucks than people) than the equally unfair ultra-liberal, hippie, pot-loving BC cliché. Not to say the rest of the town can be judged by these two; but that remains to be seen.

There’s a directness to life inherent in a small town like this. I attended a town meeting at the local high school a few days ago, where the principal was holding an information session to quell parents’ fears on the future of the school. Rumors and panic were being fanned by news of a new model involving fewer teachers and more computer-assisted classes necessary for the next school year because of rapidly declining enrollment. In the last five years enrollment has halved and next year the impressive, new building will be home to only 70 students, despite a capacity for over 300. This decline in enrollment is in line with the decline of the general population since the lumber mill – providing 200 of the best-paid jobs in town, according to the mayor – closed some six years ago. It is a very uncertain time in the life of Valemount Village.

“People who worry tend to express that worry as fact,” the principal told the school auditorium, half full with some 40-50 citizens, “and as it goes from person to person things get out of control.” But he acknowledged that the past few years had been tough on the school, and they had exhausted their savings in compensating for low enrollment. They had also exhausted their funding and grant options, so change was imminent and necessary. “Going after more money is like…”, the principal paused, struggling to find the right words, “…is like asking for champagne on a beer budget.” Not sure those were the right words to assuage the concerns of parents.

But the directness to life suggested by a town meeting of this sort was illusory, I thought. The principal’s presentation was unnecessarily long and tedious, and behind his rhetoric of “this is our collective problem and we need to, collectively, find a solution” was a predetermined objective and solution. Sounding more like a politician or a businessman, the principal had already decided on a new model and was only allowing parents to feel involved, rather than allow them to participate directly. Slide after slide of stats and academic research suggested this gathering was a shareholders meeting, and the principal, like a CEO, was doing what he could to assure the shareholders—the parents—that he had a confident, steady hand on the rudder, despite the turbulent times.

At the start of the Q&A period, the mayor stood up and thanked the principal for holding the meeting, acknowledging that he could have simply steamrolled ahead with his plans without holding any public consultation. And that’s true. But when nearly every sizeable community in this country has been incorporated (that is, made into a corporation), where they mayor’s alternate title is CEO, the structures of a business pervade all levels of local government. The “spirit” of a place, the cohesiveness of a community, the identity of a people is necessarily limited by what the rational structures of a business model can allow.

The principal spoke of the need to look squarely in the mirror, to identify the current situation. “But if we start building resorts, attracting people, who knows,” he said. And indeed the future of this town seems to be staked on tourism, especially a holiday glacier destination designed by a prominent Vancouver developer. But what control will the community have over these plans that will surely redefine the village? What control can they have in the ultra-corporate environs of Canada? That too remains to be seen.